The advancement in technology over the previous years has grown and extended enormously. People and companies are always looking for a way in which they can improve the next stage, create something new that everyone will want to get on board with, or develop further themselves. 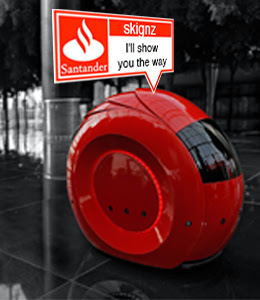 Let’s take an insight into one of the top and biggest companies in the world, and look at how they have used the advancement of technology within their business to help themselves and the custom that they receive and aim to satisfy. Santander is one of the most well-known and successful banking companies of our time.

Let’s take their headquarters in Spain and see how they have made this the best they can. They have looked at the advancement in technology, and used that to create some innovative developments in how they can improve their business and to attract as many visitors to their company.

The visitors centre is the central focus for the whole campus. Santander has spent  huge resource into styling this building in a way that will impress visitors when they arrive. The technology advancements that they have used have made the place outstanding, and will certainly impress people when they visit the headquarters. They have managed to look at communicating with the visitors in their own way, letting them be intrigued at the same time as interacting with them.
Let’s start off with looking at their first creation in technology and what they have come up with for their business.

Robots, who are interactive guest assistants – naming them Robotic Butlers.
The Robots have been designed for Santander to communicate with visitors when they arrive to the building. They are little red robots that have been created using GPS technology to guide the visitors around the building facilities. The robots are only small/medium sized, but have a lot of information stored inside them, they are even fluent in various languages.

The way that the robots have been designed to work is that when a visitor arrives to the Santander headquarters in Spain, they will be able to find a touch screen console where they can choose their language and where they wish to be going. Whether that be a meeting room, another part of the building or campus, or just to find out some general information. The robots will assist visitors to find where they need to be, through the touch screen control, they ‘show you the way’. 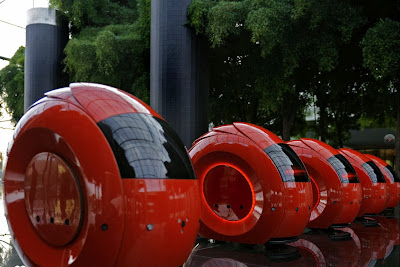 Besides the robots that Santander have had designed, they also created the Augmented Reality model of their campus facilities: the Augmented Reality Explorer.
Santander got a designer to build a massive architecture model of their campus, and then translated the model into a 3D space.
Four screens were designed to go around each side of the model which slide from side to side. Santander decided to use Augmented Reality and make it look like the four screens are transparent. When a visitor or someone wants to look at the 3D model, they will look through the screen and see additional information that is not already displayed. The screens provide a digital layer of information when you look through them, so that users can explore the aspects that we don’t see or understand about the campus and that is not already visually relevant.

Santander also has an interactive wall that they created for visitors coming to Santander headquarters. The wall has been created as a motion-sensing video wall out of touch screens. The wall can function on different stages given the distance that the user has to the wall itself. The application can react to what is around it and adapt to different situations. Visitors can also interact with the touch screen wall to find out information on Santander and the headquarters itself. 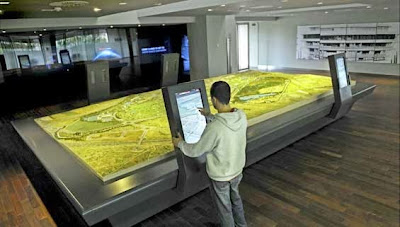 Santander has aimed to create this exploration of technology to distinguish it from its competitors as a forward thinking bank and be seen as one of the finest in the business, through interactive robots, augmented reality and touch screen interactive displays.
But how much will all of this cost them? Potentially costing Santander millions to create all this technology, yet limited to use inside its reception area within their headquarters campus.

What if there was a different and more cost effective way in which all of the above technology could be brought together in one simple app available on any mobile device.

skignz is a new app invention through which signs and 3D objects are placed in the environment and can be viewed via a mobile camera device. Through using the free viewer app, you can view the Skignz that have been placed in the real world in real time.

An example of where skignz has been used effectively in a similar type of environment is Teesside University (UK). Around Teesside University, skignz have been set up and placed around campus, so visitors, students, staff and even suppliers are able to navigate their way around the campus. They can simply load up the app through their mobile device and then view where the skignz are with the information of what they are looking for.

Similar to the Santander headquarters campus in Spain, helping people to navigate about through their robots and interactive augmented reality model, skignz does this for Teesside University. skignz is not restricted to Santander or Teesside University but can be implemented for any campus environment across the globe.
The skignz technology is not restricted just to campus navigation; imagine if every pin on Google maps was transformed into a skignz, it could be extended to villages, towns, cities, countries and continents or anywhere on the planet! There is no limit to where skignz can be placed and where it can be used. It adapts and has all the same advancements of technology just like Santander HQ visitor experience, however with no geographic location restrictions. 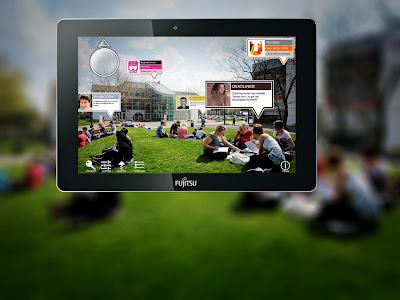 As mind blowing as skignz is to navigate around, it can also be used socially. It can be a way for people to keep in touch with others, such as social media, but instead of having Facebook they could set up their own profile right above their own heads.
You can place a skignz with all the information on, such as a status or what they wish to say along with an image, and have people see this or who they wish too by setting their privacy settings to either public or friends.

What do you think? Have a see for yourself using the following links.